Eguisheim and its vineyards

Eguisheim and its vineyards 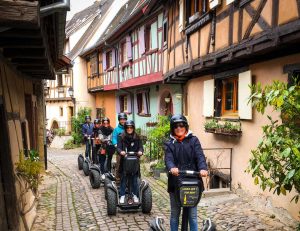 Eguisheim, cradle of Alsace wines, is a colourful village built in concentric circles around its castle, nestling below gentle rolling hills covered with vineyards.

Eguisheim has been named as one of « France’s most beautiful villages » since 2003, a National Floral Trophy Grand Prix winner since 1989, Gold medal winner of the European « Entente Florale » competition in 2006, one of the “Christmas Towns and Villages” since 2009, « Station Verte » since 2012 and it was voted « France’s Favourite Village » in 2013.

At an altitude of 210 metres, in the heart of Alsace, this winegrowing village with its 339 hectares of vineyards is only 5 km from Colmar and is close to the European cities of Strasbourg, Freiburg and Basel.

As the birthplace of Pope St. Leo IX, Eguisheim enjoys a worldwide reputation.

Thanks to the skill of Eguisheim’s wine producers, the remarkable vineyards and an exceptional microclimate, the “Eichberg” and “Pfersigberg” have been classified as two of Alsace’s Grand Cru slopes.

Eguisheim is a thriving and active village both commercially and gastronomically. Its top quality restaurants contribute to Alsace’s famous culinary heritage.

A fortified city since 1257, Eguisheim is proud of its picturesque concentric streets of half-timbered houses, rich with floral decoration.
16 former “cours dimières” (church wine estate offices), fountains and a parish church with Callinet organ, all contribute to the historic personality of the village.

The parish church is dedicated to Saints Peter and Paul. Reconstructed in 1220, only the belfry now remains from the old Roman church. From the 14th century timbers of the belfry roof hang four bells of which the largest came from Marbach Abbey. Its old doorway houses a polychrome wooden sculpture or “Opening Virgin”. Dating from 13th and 14th centuries it is, with the one in Kaysersberg, unique in Alsace.